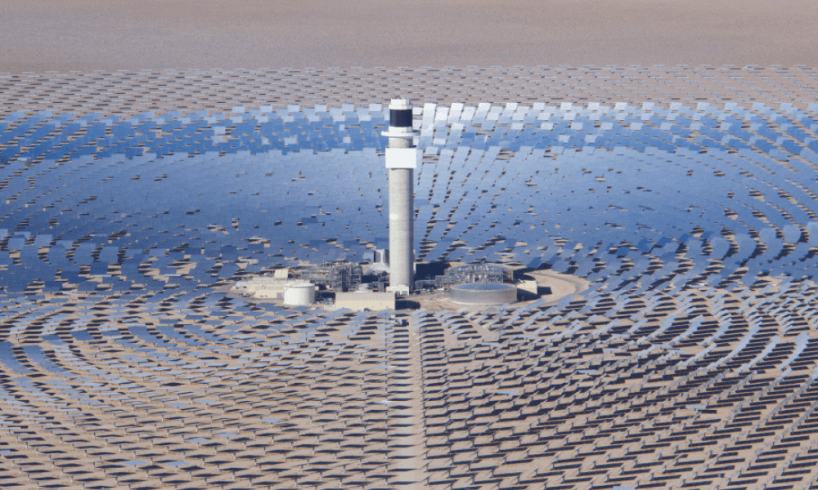 SolarReserve is a leading global developer of utility scale solar power projects These include electricity generation by solar thermal energy and photovoltaic panels.

SolarReserve has commercialized a proprietary advanced solar thermal technology with integrated energy storage that solves the intermittency issues experienced with other renewable energy sources. This proven US developed technology generates renewable base load and dispatchable power and can compete with traditional fossil fired and nuclear electricity generation. The company currently has more than $1.8 billion of projects in construction and operation worldwide, with a development pipeline of 5.6 gigawatts (GW) across the world’s most attractive, high growth renewable energy markets.

Kevin Smith is SolarReserve’s Chief Executive Officer and joined the company as one of its founding executives in 2008. Smith drives SolarReserve’s efforts to develop and build large-scale solar energy projects which include $1.8 billion of solar projects in construction and operation in the US and internationally. Smith brings 30 years of energy industry experience to his role as SolarReserve’s CEO. He has held senior executive positions with many successful energy companies aimed at developing solar and wind energy projects as well as natural gas, oil and biomass-fueled electricity facilities. Throughout his career, Smith has actively led the development, financing and construction of privately owned energy projects in fifteen countries and five continents around the world. These constructed projects total more than 5,000 megawatts with long-term electricity sales contracts in excess of $55 billion.

As renewable energy penetration grows, the need for utility scale renewable generation with storage technology is increasingly important to mitigate intermittency problems, deliver power into peak demand periods, and support transmission system reliability. SolarReserve was formed in January 2008 with the purpose of commercializing advanced US developed molten salt ‘power tower’ technology with energy storage for utility scale concentrating solar thermal power (CSP) under a global exclusive license from Rocketdyne, who at the time was a subsidiary of United Technologies. This proprietary technology was developed and tested for more than two decades, with over 50 US and global patents. In October 2014, SolarReserve acquired all the technology outright, including intellectual property rights and patents related to molten salt technology for concentrating solar-thermal power and electricity storage applications, and heliostat designs and collector field control systems.

CSP power tower technology with integrated molten salt energy storage is emerging as the industry leader in terms of efficiency, reliability, and cost among all CSP options. Independent studies have shown that CSP with molten salt storage is as reliable as fossil fuel generation for meeting the grid’s demands at peak times. As intermittent renewables such as wind power and photovoltaics (PV) become more widespread globally, they will contribute less and less to meeting peak demands, but CSP with storage will maintain its value over the long term, even as demand profiles change. While battery technology continues to improve, progress is incremental, and costs are prohibitive for large scale installations – with these high costs further complicated by battery performance, degradation, replacement and end of life environmental considerations.

SolarReserve’s flagship 110 MW Crescent Dunes Solar Energy Plant in Nevada, with 10 hours of full load energy storage, is the world’s first utility-scale facility to feature advanced molten salt power tower energy storage capabilities. The project’s 1.1 GW hour storage capability is almost 40 times the size of the largest battery storage project in construction or built to date. The Crescent Dunes project, now complete with construction and currently in the commissioning phase, is scheduled to commence full operations in mid-2015, and will be the only operating utility scale molten salt power tower on the planet. Crescent Dunes will deliver more than 500,000 megawatt-hours of electricity per year – twice the output of a similar sized PV solar project without storage. SolarReserve’s US developed proprietary storage technology is a fraction of the cost of utility scale battery storage with virtually no performance degradations over time. And the molten salt never needs replacement for the entire 30 year life of the plant.

Last December, the South Africa Department of Energy selected SolarReserve’s 100 MW Redstone project in its latest round of solar energy projects at the lowest delivered cost of electricity of any concentrating solar power project in South Africa to date. The 100 MW project with 12 hours of full load energy storage, based on the technology deployed in the Crescent Dunes project, will be able to reliably deliver a stable electricity supply to more than 200,000 South African homes during peak demand periods, even well after the sun has set. The project is scheduled to achieve financial close later in 2015 and commence operations in 2018. Along with the 100 MW Redstone CSP project, SolarReserve currently has three photovoltaic projects, totaling 246 MW of generation capacity in operation in South Africa.

To deliver reliable and cost effective 24/7 base load power, SolarReserve is developing CSP projects that integrate substantial PV into the design. These ‘hybrid’ CSP PV projects can compete with traditional generation while providing emission-free and low water use generation. Balancing CSP with PV ‘inside the fence’ eliminates the intermittency issues associated with PV, and combining the two technologies reduces overall delivered power cost. These baseload solar power plants can operate at a high capacity factor and availability to fully utilize transmission infrastructure. In Chile, SolarReserve was the first company in the country, and worldwide, to start development of a fully integrated CSP and PV hybrid project to supply power to the mining sector, an industry that requires 24/7 power supply. This hybrid concept will maximize the output of the facility, delivering over 1,700 gigawatt hours annually, at a highly competitive and unsubsidized price of power that competes with coal and natural gas plants to provide round the clock supply. The project’s more than 3.6 GW-hours of energy storage is the key to meeting the market demands.

SolarReserve is headquartered in Santa Monica, California, and maintains a global presence with seven international offices strategically located in Africa, the Americas, the Asia Pacific region, the Middle East, and Europe given its widespread project development activities across more than 20 countries.